The royal baby is here! Duchess Meghan and Prince Harry welcomed their first child on Monday, May 6, and the former Suits actress’ mom, Doria Ragland, is showing her support.

“The duchess’ mother, Doria Ragland, who is overjoyed by the arrival of her first grandchild, is with Their Royal Highnesses at Frogmore Cottage,” the statement released by the palace reads. “Her Royal Highness and the baby are both doing well.”

The Duke, 34, and Duchess of Sussex, 37, confirmed that they had a little one on the way in October 2018, five months after tying the knot at St George’s Chapel in Windsor Castle. 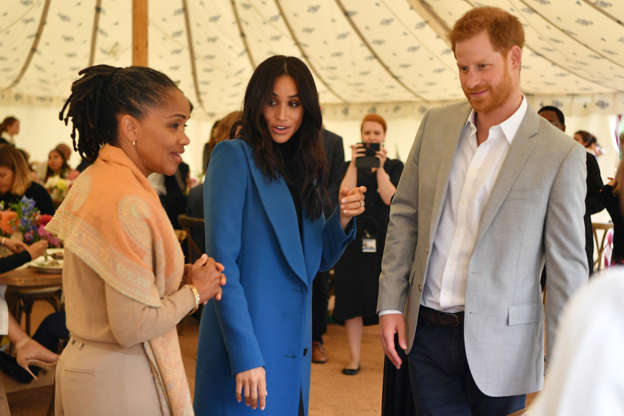 Doria Radlan and Meghan Markle are seen at the Closing Ceremony on day 8 of the Invictus Games Toronto 2017 at the Air Canada Centre on September 30, 2017 in Toronto, Canada. The Games use the power of sport to inspire recovery, support rehabilitation and generate a wider understanding and respect for the Armed Forces. (Photo by Karwai Tang/WireImage)

“Their Royal Highnesses The Duke and Duchess of Sussex are very pleased to announce that The Duchess of Sussex is expecting a baby in the Spring of 2019,” Kensington Palace’s statement read. “Their Royal Highnesses have appreciated all of the support they have received from people around the world since their wedding in May and are delighted to be able to share this happy news with the public.”

The statement also revealed that the yoga instructor, 62, and the rest of the royal family were excited about the pregnancy. “[Ragland] is very happy about this lovely news, and she looks forward to welcoming her first grandchild,” it went on to say.

“The Queen, Duke of Edinburgh, Prince of Wales, Duchess of Cornwall, and Duke and Duchess of Cambridge are delighted for the couple and were able to congratulate them on Friday at the wedding in person,” the statement continued, referring to Princess Eugenie and Jack Brooksbanks’ nuptials.

In November 2018, a source told Us Weekly exclusively that the new royal “wanted her mom to move to the U.K.” when her baby arrived.

The royal insider added: “Doria hasn’t made any commitments about doing so. She has told friends that she would keep her house in Los Angeles, but is indeed planning on spending a majority of her time with Meghan.”

Ragland, who was in attendance at Meghan and Harry’s wedding, was married to the retired actress’ dad, Thomas Markle Sr., from 1979 to 1987.